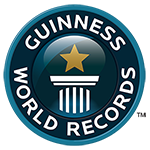 Before 1997, SACO had never worked in entertainment or architecture and was making control panels for nuclear and hydro power plants. We focused on industrial-type work because we loved the quality of our projects and our clientele. When we were in the final stage of developing the world’s first LED screen, using colored pixels to create images, we were approached by the legendary Irish rock band U2 to design and manufacture a giant 50 ft X 150 ft LED video screen for their PopMart tour. Inventing is our passion, so SACO accepted the challenge, and spoke with U2 stage designer Willie Williams and stage architect Mark Fisher, founder of Stufish Entertainment Architects, to develop the video technology to bring their set design to life.  The screen contained 150,000 pixels, each of which contained eight separate LEDs of various colors. The screen served as a backdrop, conjuring images of consumer culture by means of one million separate LED fittings.

“I remember when we sold our very first LED Video display in 1997 for the U2 PopMart tour, our technology was so new, and no one had ever done this before. I followed the tour from city to city to make sure everything went smoothly – that’s who we are as a company, customer-focused and innovation driven,” said Fred Jalbout, Chairman and CEO of SACO.

The PopMart Tour was a worldwide concert launched in Las Vegas in front of 40,000 fans in support of the group’s album, Pop. The tour’s concerts were performed in stadiums and parks from 1997 through 1998. The PopMart Tour comprised five legs and 93 shows, attracting about 3.9 million fans. The tour took U2 to 20 countries, including South America, South Africa and Israel, to name a few.

This was the world’s first LED touring screen and is listed in the Guinness World Records for largest screen ever toured.

“This is where PopMart got started because this is where all of this was built. Here, in this city, Montreal. Thank you, Fred Jalbout. It’s kind of cool to bring it back and see what you think of it because you made it,” said Bono, lead vocalist of rock band U2 onstage at the Olympic Stadium on November 2, 1997.

Since this tour, SACO has been committed to creating the future of LED video technology.