The latest, state of the art, NFL venue is home to the Los Angeles Rams and Chargers. The $5-billion project, built on the 300-acre former site of the Hollywood Park Racetrack in Inglewood, makes it the largest pro-stadium in the NFL.

SoFi Stadium was built to accommodate 70,000 football fans at games and up to 100,000 people at special events.

“When you see our SoFi Stadium home and the ongoing development surrounding it, you have to marvel at Stan Kroenke’s vision,” said Los Angeles Chargers Owner and Chairman of the Board Dean Spanos. “This is an iconic project, anchored by an iconic stadium, that will not only redefine the City of Inglewood, it will redefine the landscape of greater Los Angeles for the next century and beyond. This has been a long time coming, and we cannot wait to usher in a new era of Chargers football on what will undoubtedly be the grandest stage in all of sports.”

The architects and builders say they’ve created the first “indoor-outdoor” stadium, but that classification doesn’t exactly sink in until it’s experienced. What they mean is that SoFi Stadium has a roof — a massive, clear canopy arching artfully from the ground across the entire arena bowl and an adjoining plaza with a separate 6,000-seat performance venue— but the building also is open at each end and on its concourses. The roof is made of material that dissipates heat, and dozens of roof panels can be rolled back to allow in even more fresh airflow.

SACO products were specified by LAM Partner with the participation of our agent Reflex Lightning. Lam Partner and SACO designed a unique pixel integration in collaboration with Pfeifer FabriTec, that attaches directly on ETFE Roof.

With a 5ft pixel pitch and more than 27,000 Saco V-Pix-8, this video canvas offers an amazing and unique point of view in and out of LAX.

SoFi Stadium will hold year-round sports and entertainment events and has already been slated to host Super Bowl LVI in 2022, the College Football National Championship game in 2023, and the Opening and Closing Ceremonies of the 2028 Olympic Games. 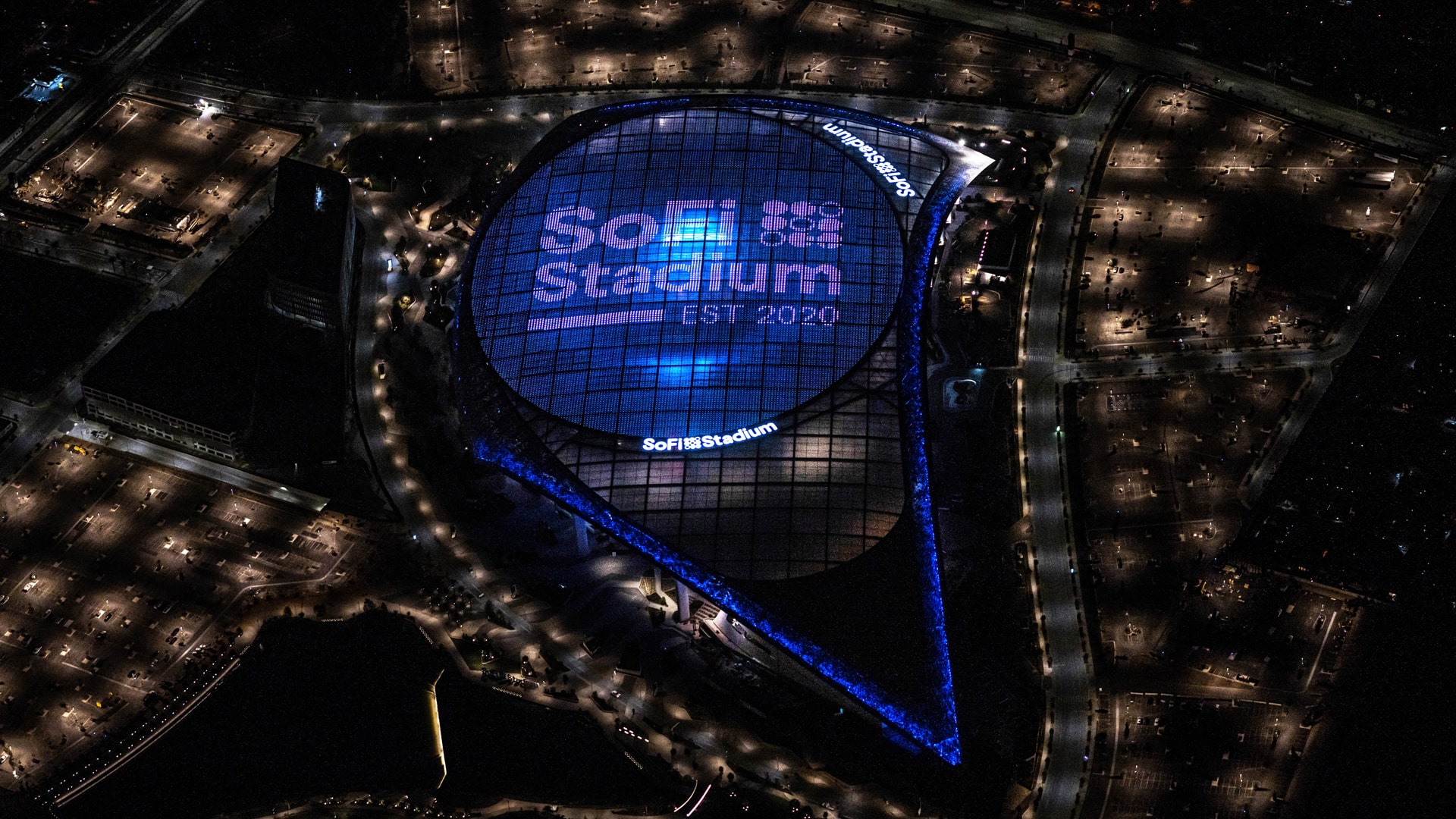 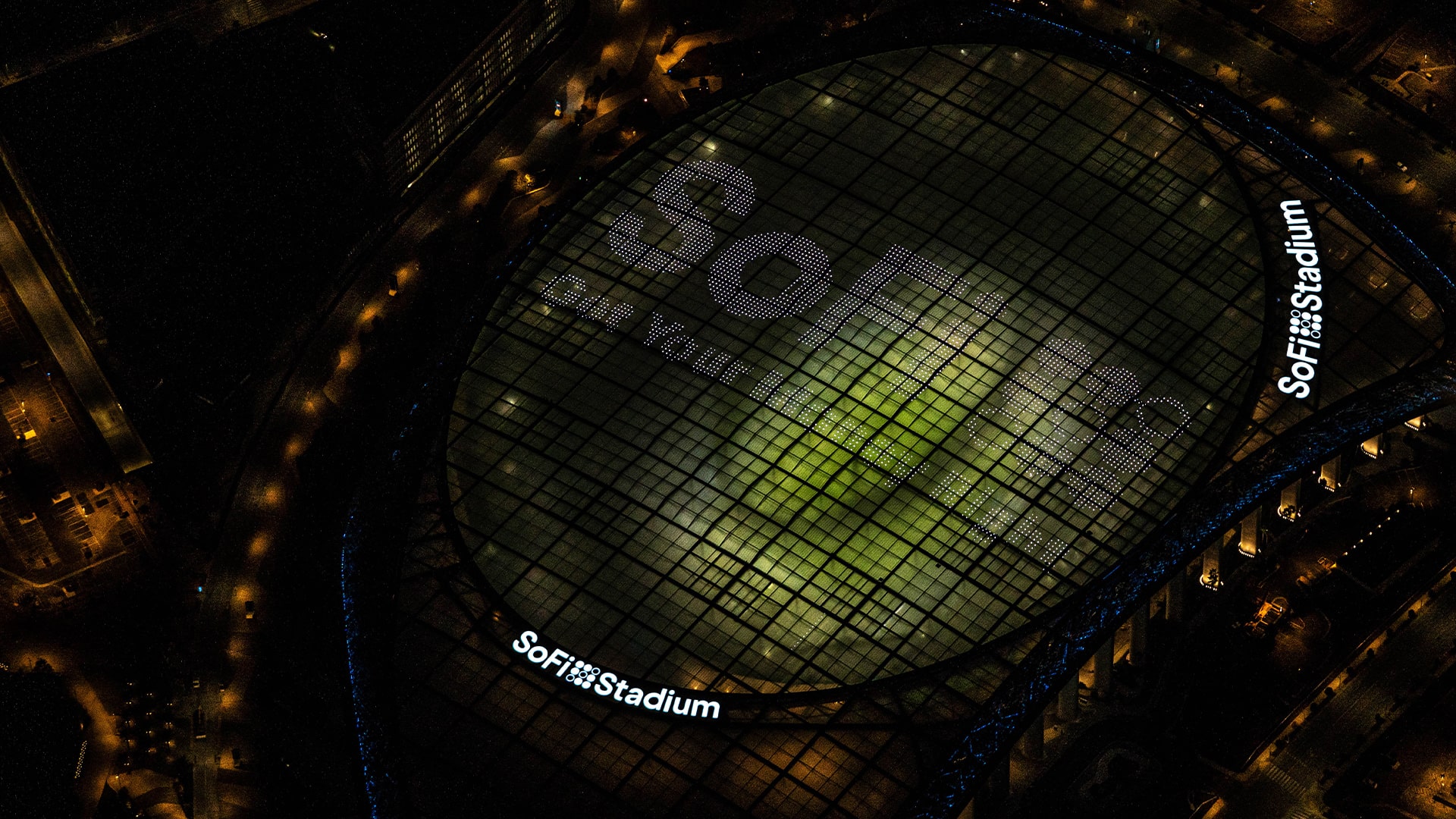 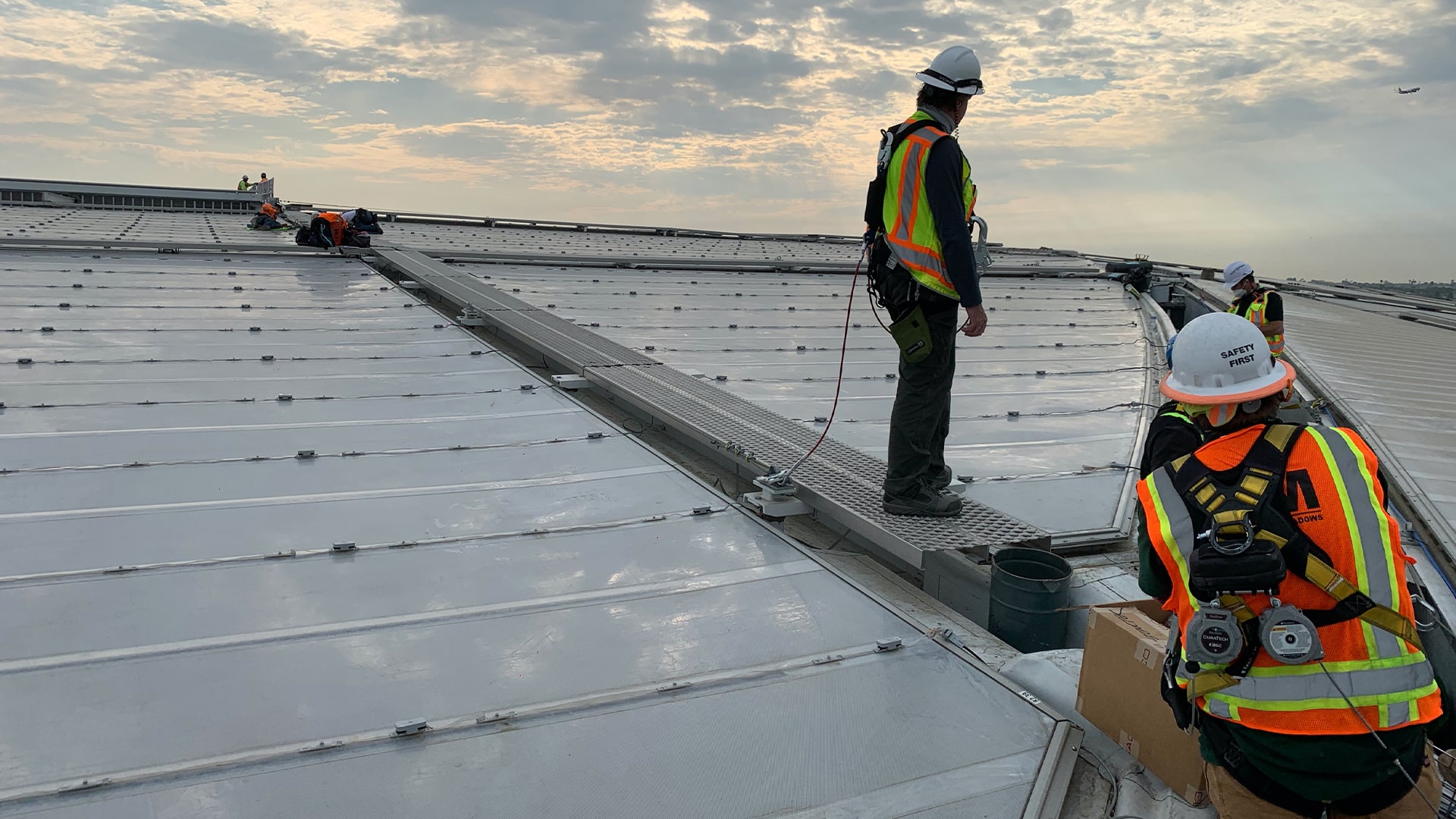 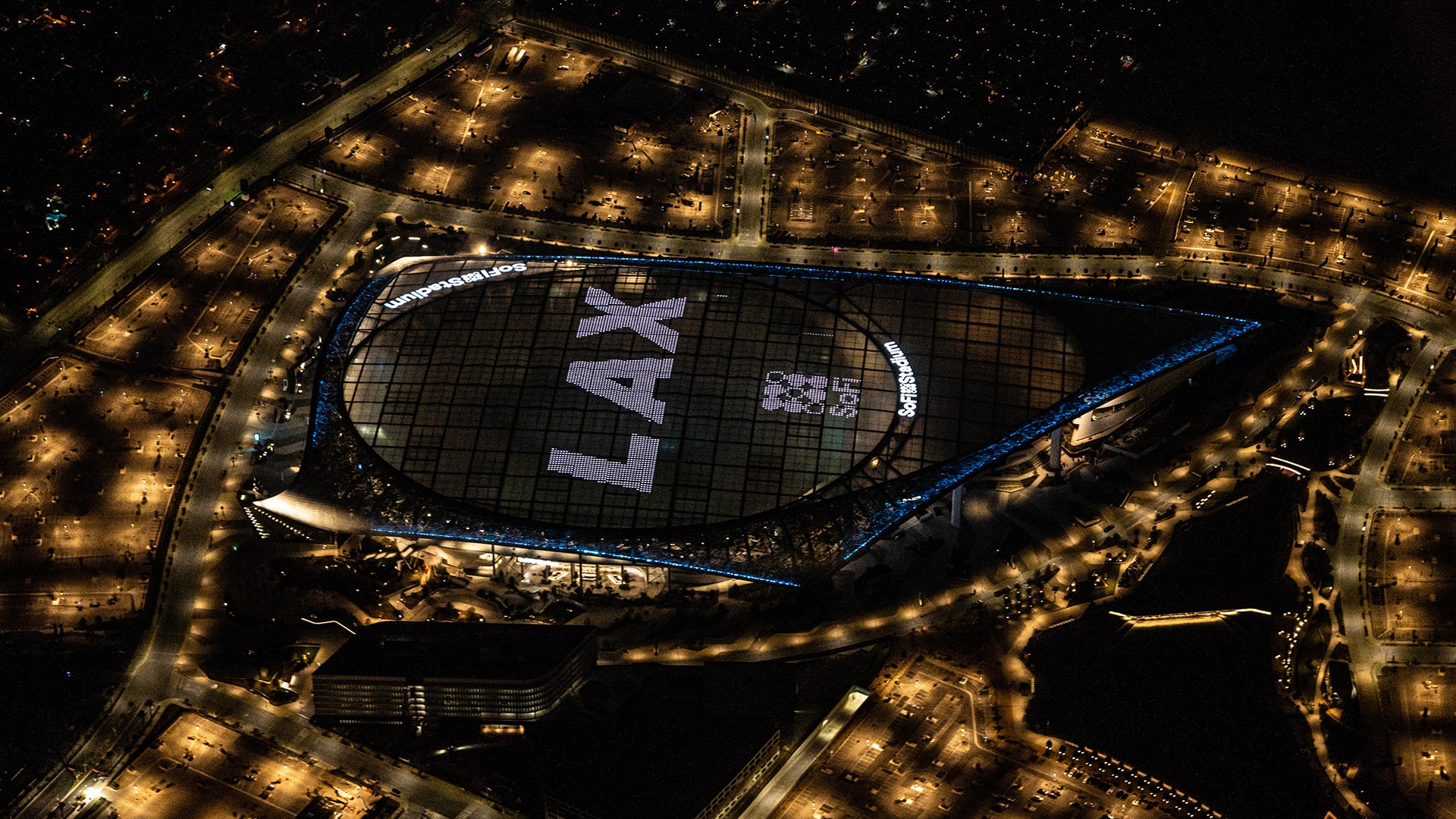 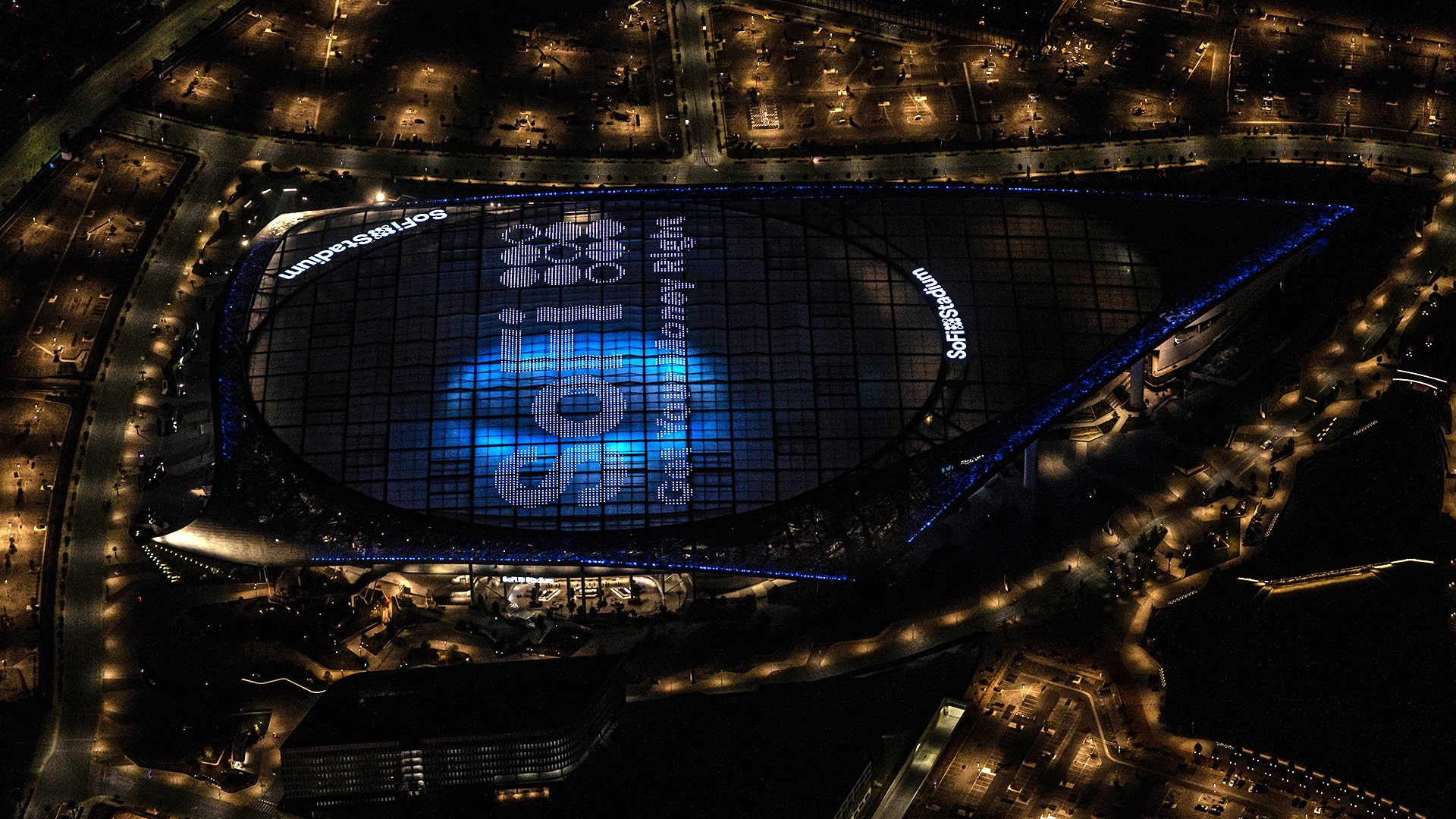 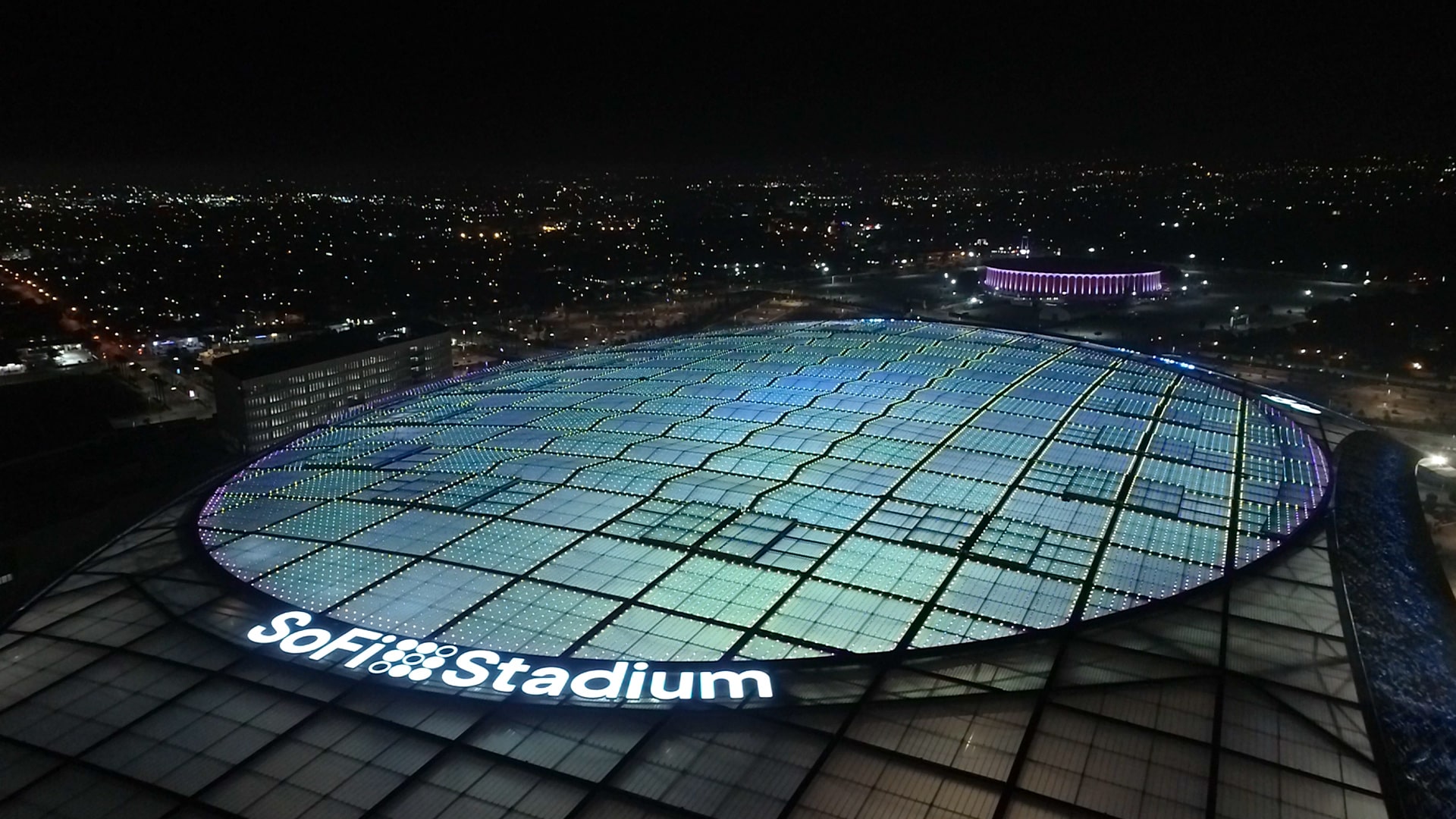 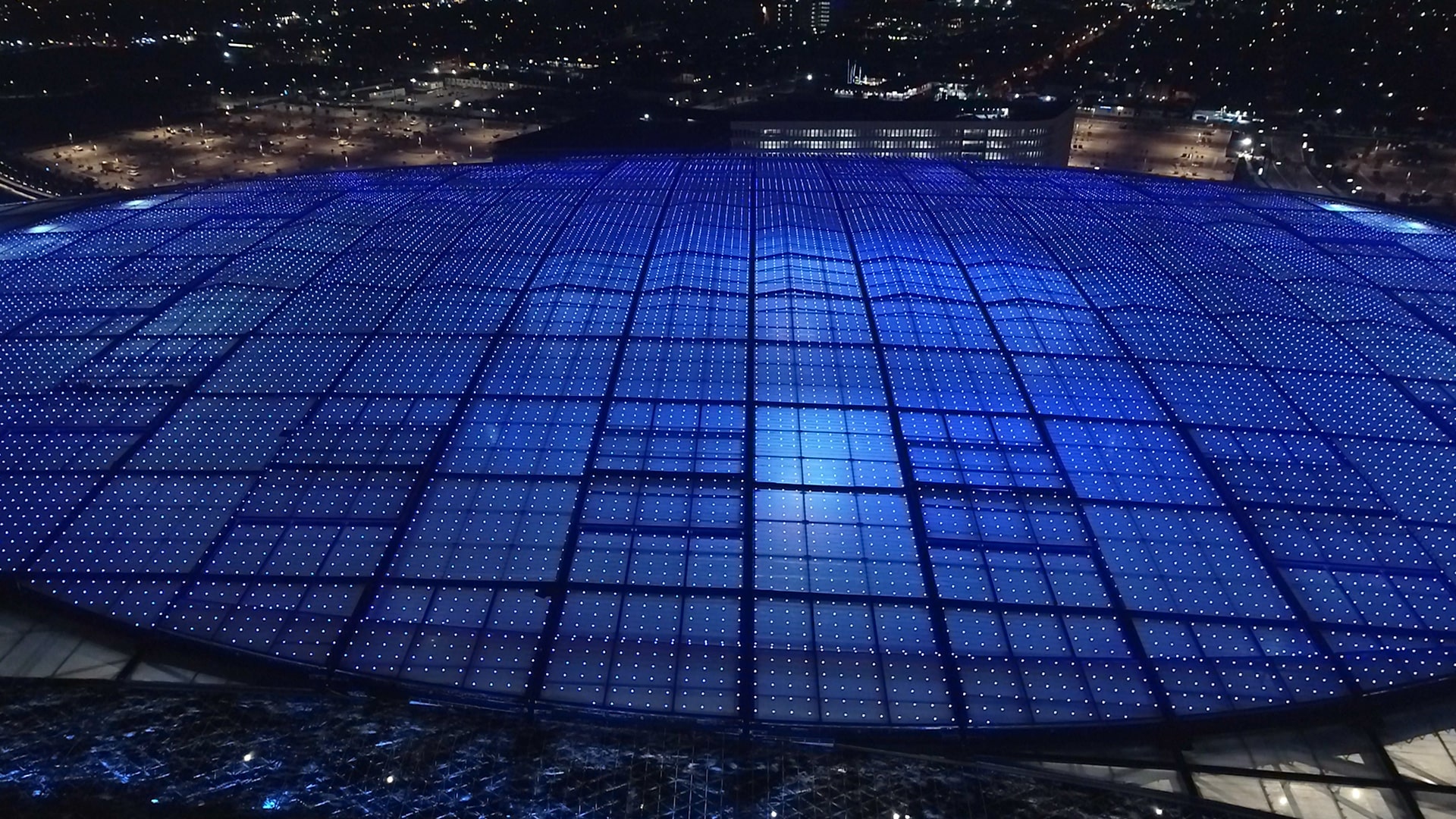 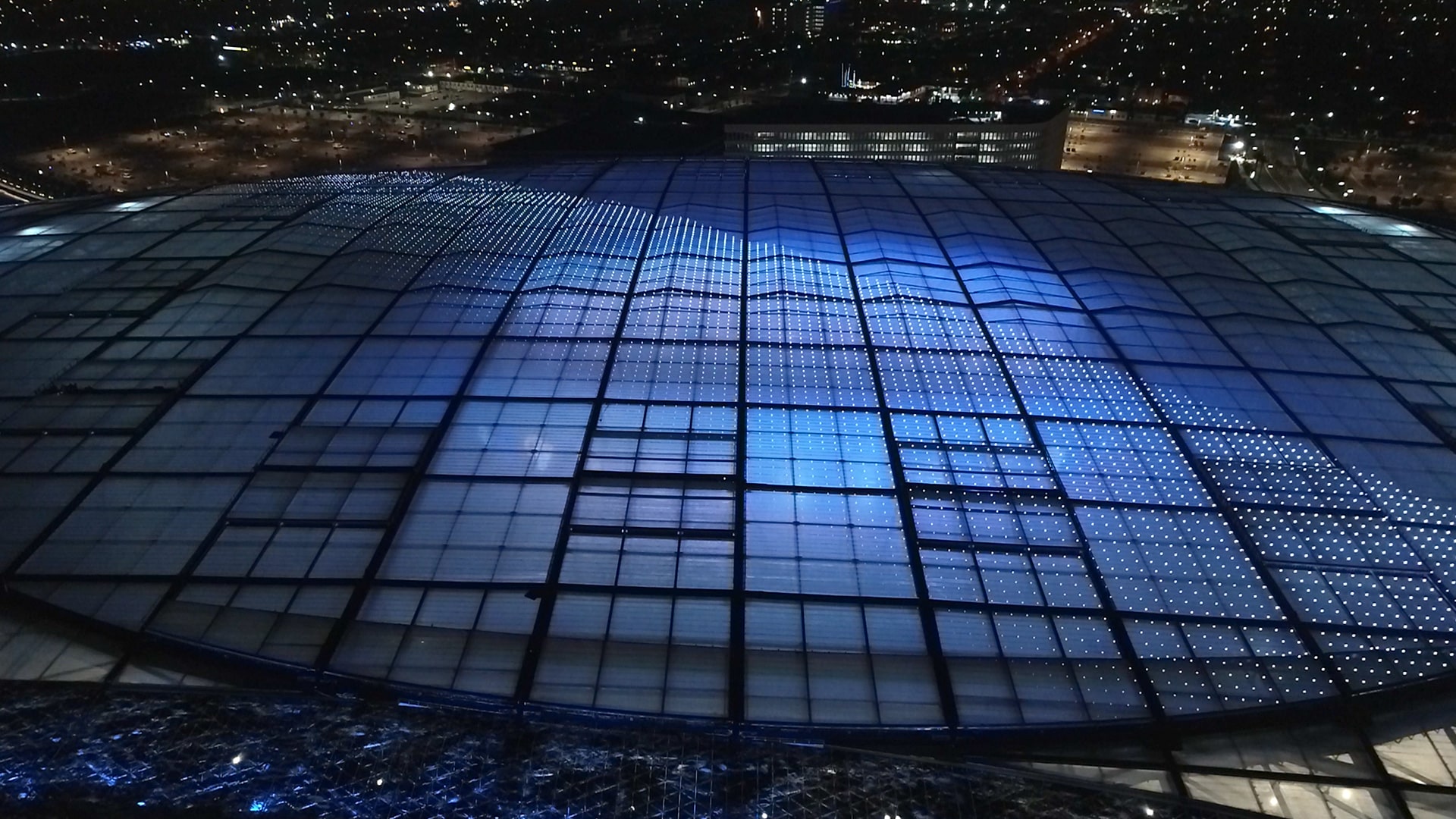 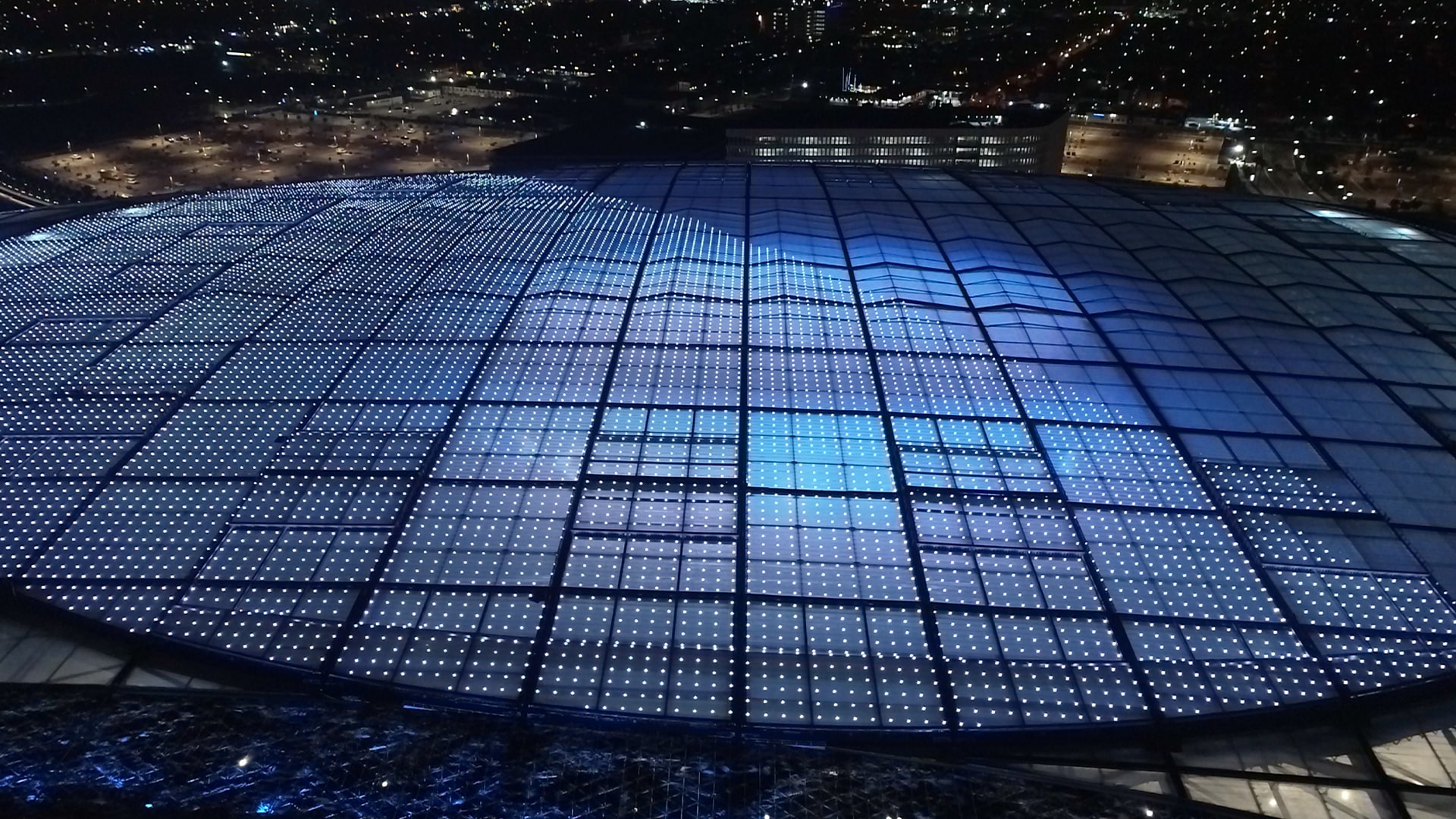 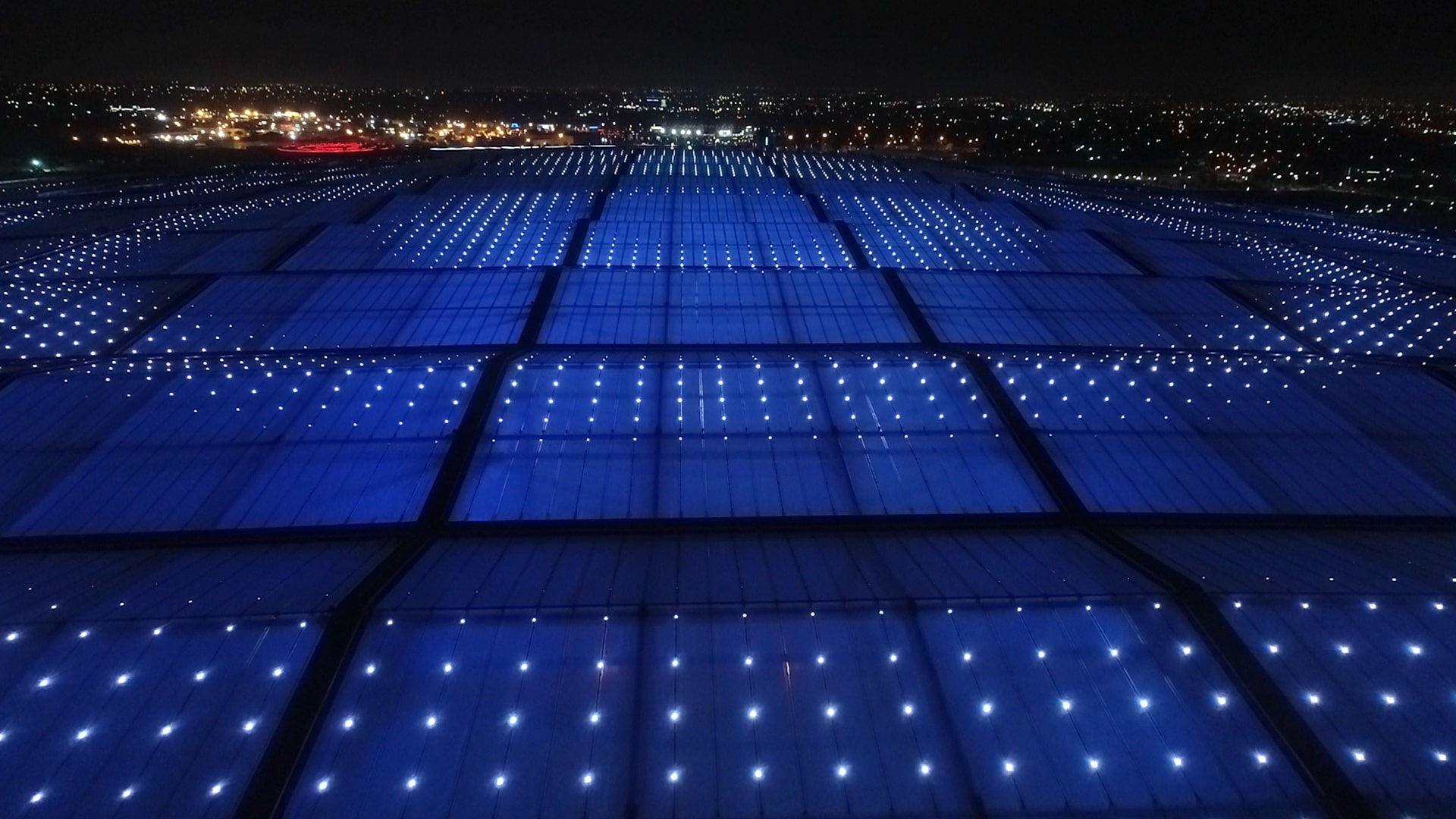 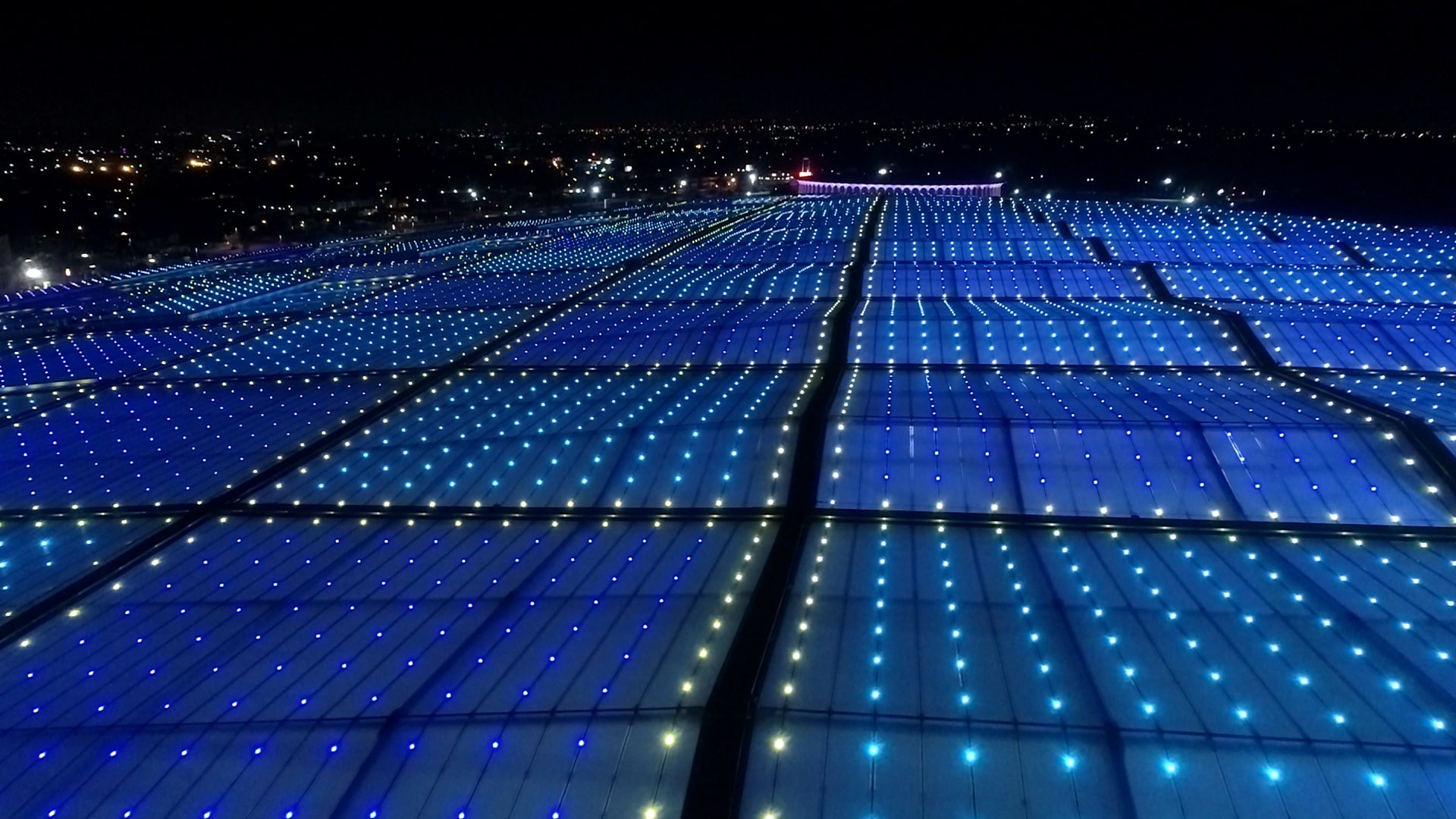