On May 29, 2018, the Major League Soccer announced that Cincinnati would join the league in 2019 as an expansion team under the FC Cincinnati brand. The West End Stadium, a 26,000-seat soccer-specific venue in the West End, is scheduled to open in 2021. Designed by the architectural design firm Populous, the $250 million West End Stadium features an ambitious interpretation of Cincinnati on the rise, a design that will stand out among North American stadiums and take a place among the world’s most distinctive sporting venues.

Inspired by the energy of the FC Cincinnati fan base, the new stadium exterior facade and continuity of the seating bowl will electrify and energize the FCC fan base and the Queen City.

“As a Cincinnati native and lifelong resident, I have nothing but pride knowing our West End Stadium will be a strong symbol of this city on the world stage. We firmly believe we’ve not only matched the league’s best, but pushed the bar further and will deliver a superior fan experience for our incredible fan base. West End Stadium was designed to showcase and harness that passion and create an extraordinary atmosphere and home-field advantage for our team.”
—Jeff Berding, FC Cincinnati President

In the context of utilizing LED lighting to elevate urban spaces, the FCC West End Stadium lighting facade system offers endless visual opportunities through the balance of active and passive lighting effects. The facade-integrated media lighting serves as FCC’s communication to the city and its fans, igniting its passion and support for the team. FC Cincinnati’s West End Stadium is the very first stadium in the world to use the SACO V-STICK S video lighting technology, the same technology used to light up the award-winning, tallest structure in the world, the Burj Khalifa, located in Dubai.

Tailor-made for exterior use, the SACO V-STICK S can perform in both hot and cold weather conditions. A total of 14,370 feet (8,715 units) of V-STICK S will be integrated within 287 facade fins, designed with space allocation for cable management and easy maintenance access. Every pixel of the V-STICK S can be individually controlled and synchronized, so all elements work together seamlessly, using the ultra-fast and robust SACO NANO 4K Video Processor control system. The whole installation will be powered by the SACO V-BRAIN 600, an innovation in power and data delivery. This modular exterior-rated system provides flexibility and reliability for outdoor high-performance projects like the West End Stadium.

“Working on this incredible project with Populous and the FC Cincinnati team has been incredibly fun, and furthers SACO’s commitment to an innovative, ‘freestyle’ video technology that provided architects and clients with the enhanced ability to explore beautiful designs with fewer constraints and seamless integration of video lighting. We are honoured that the team, owner and architects have entrusted SACO with their nighttime identity. This stadium is gonna rock”
– Jonathan Labbee, CO-CEO of SACO.

SACO’s in-house Media Collective team will also create a range of dynamic media content to be played on a daily basis and during various events at the stadium, including the fins inauguration light show. Bringing the architecture alive in a very unique way, the light content will also boost the atmosphere on event days and carefully highlight the impressive shape of the architecture in a selection of creative approaches.

The first game and grand opening of the West End Stadium are planned for Spring 2021. 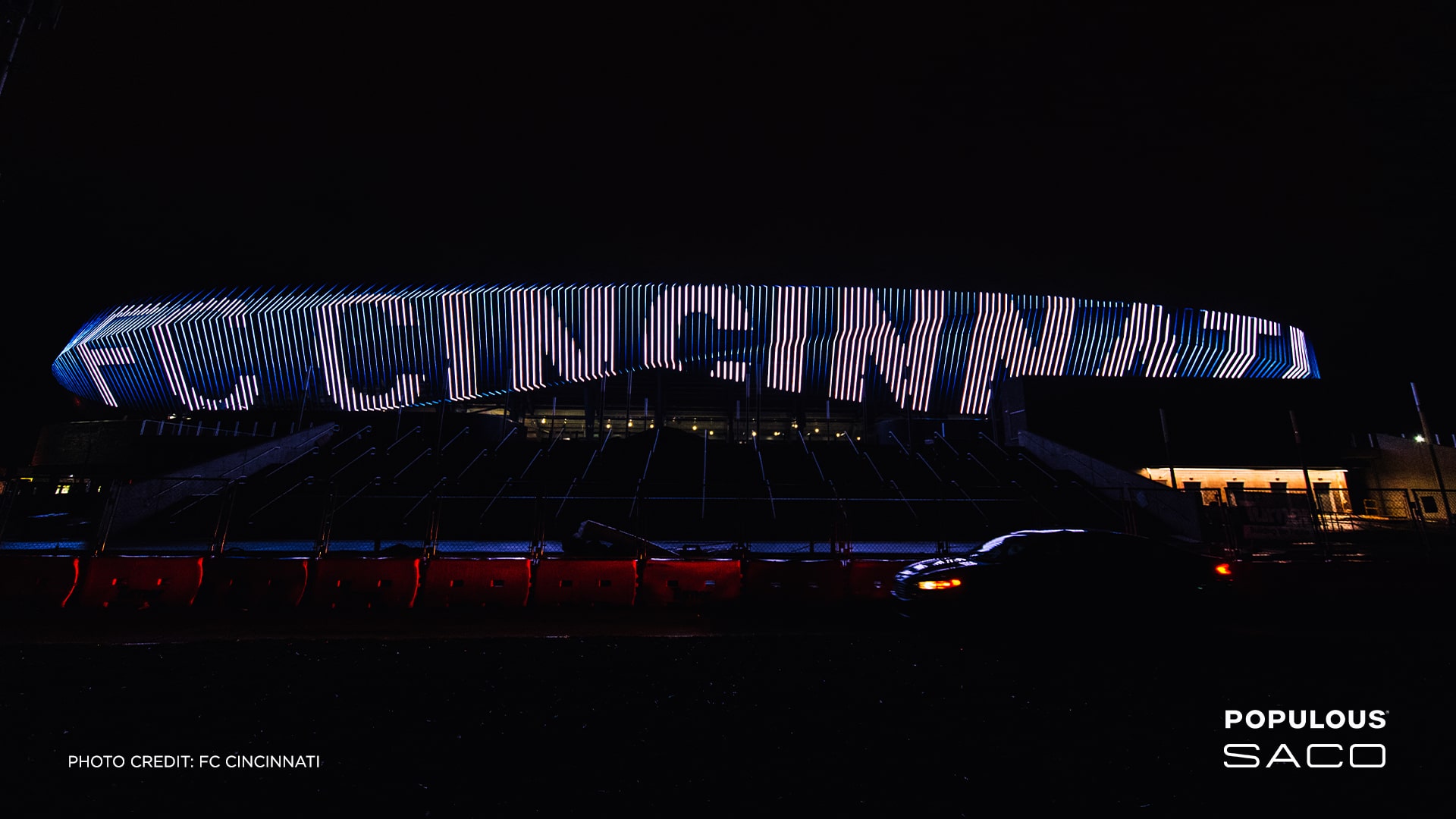 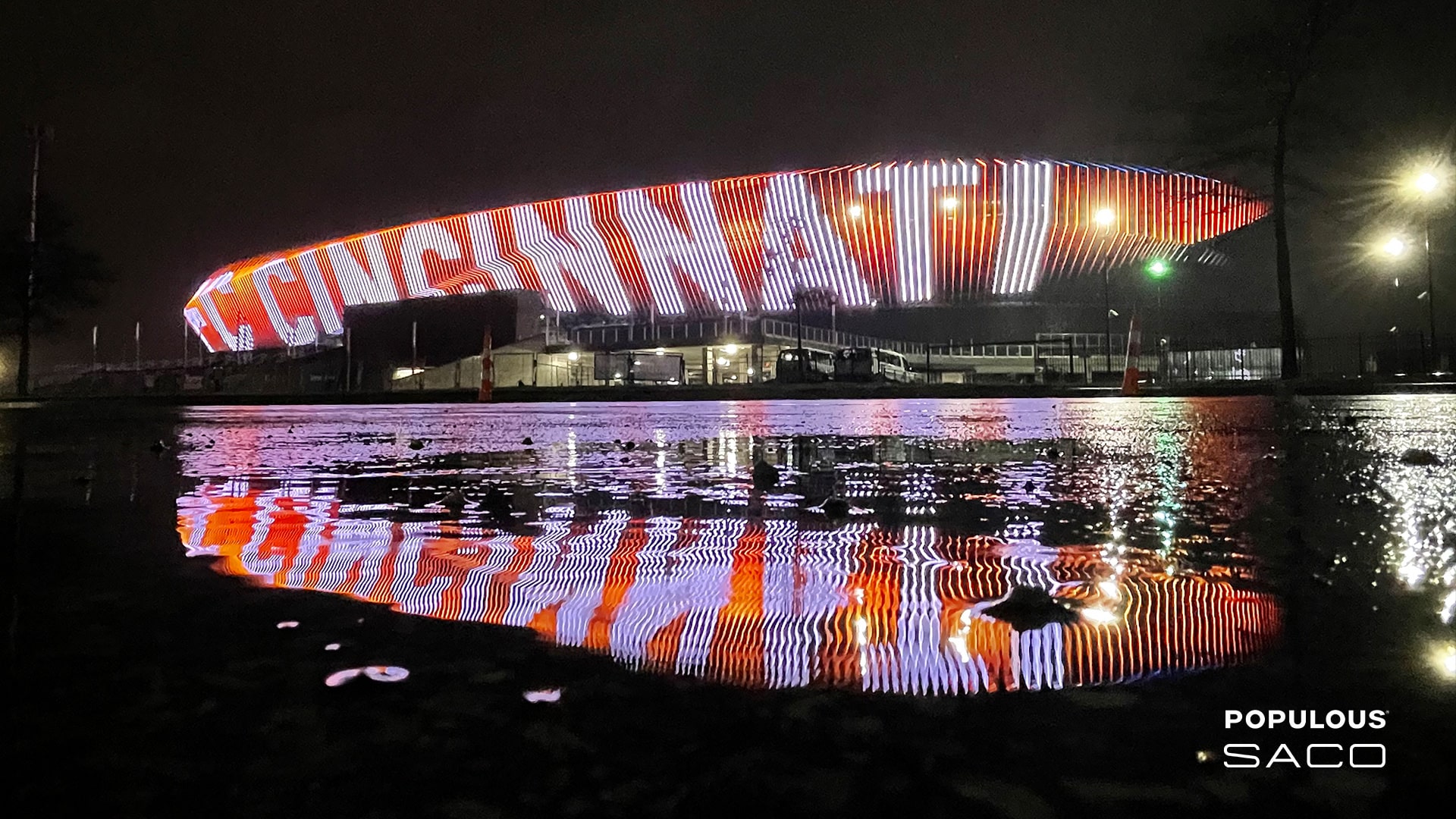 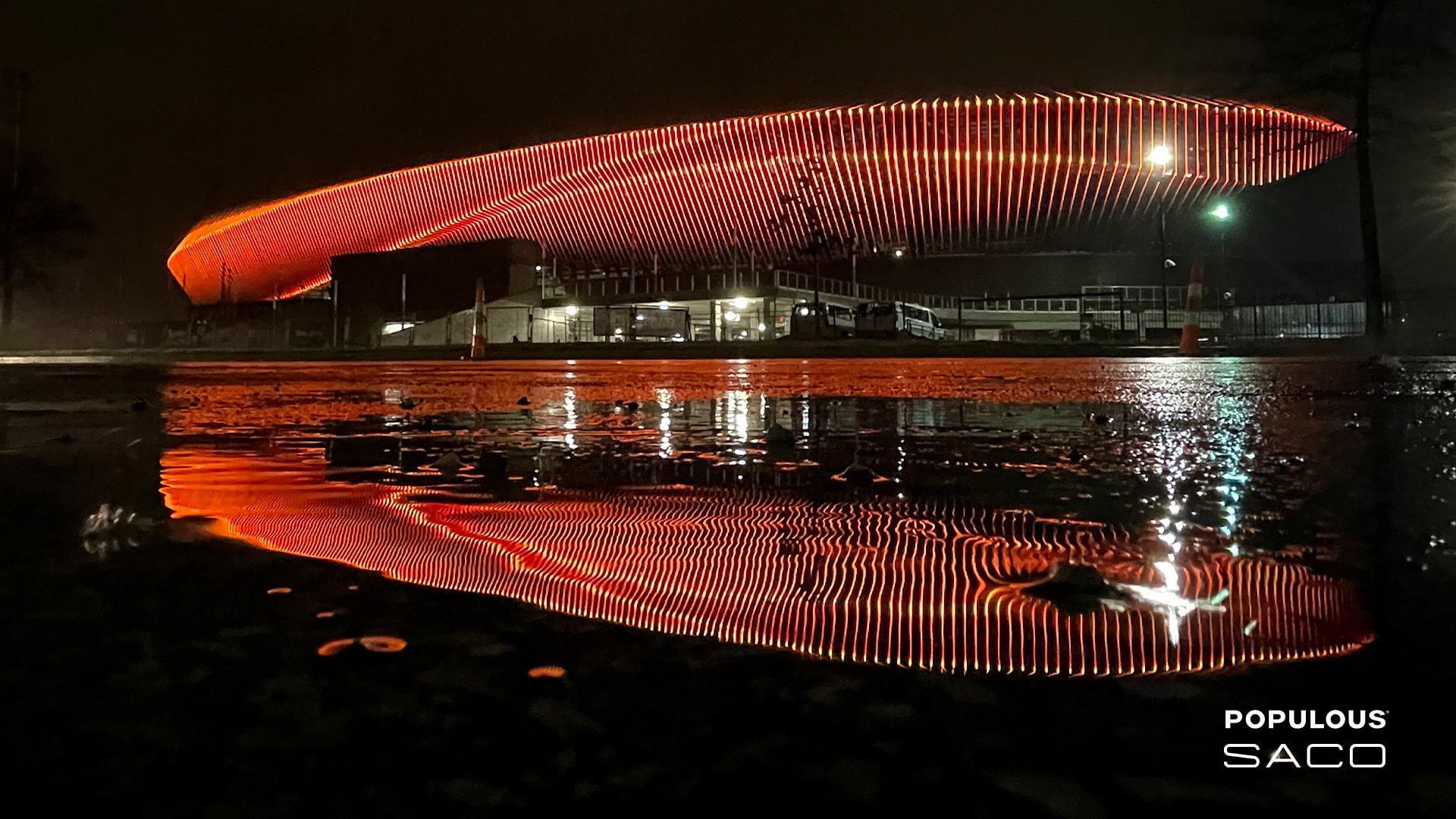 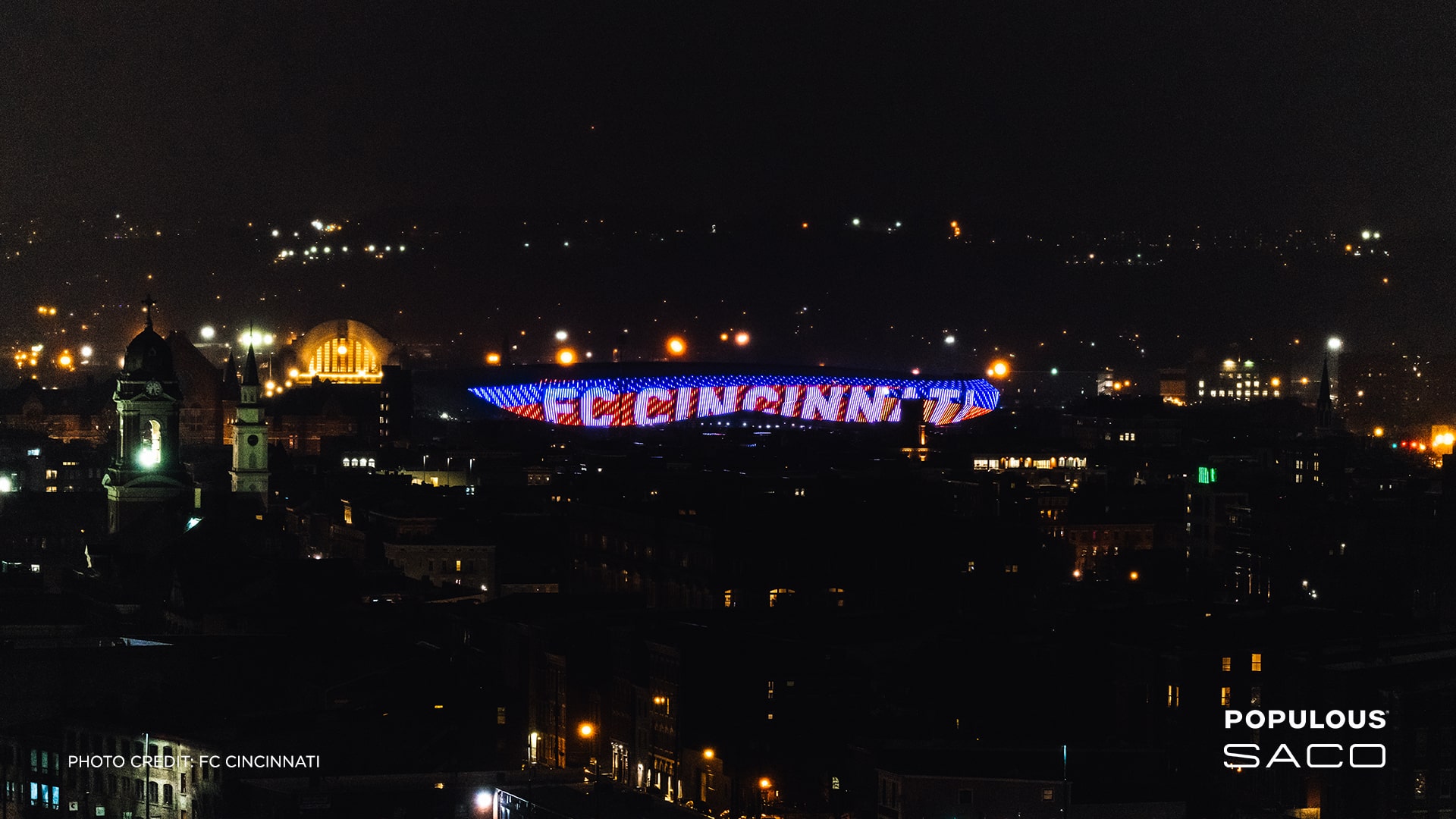 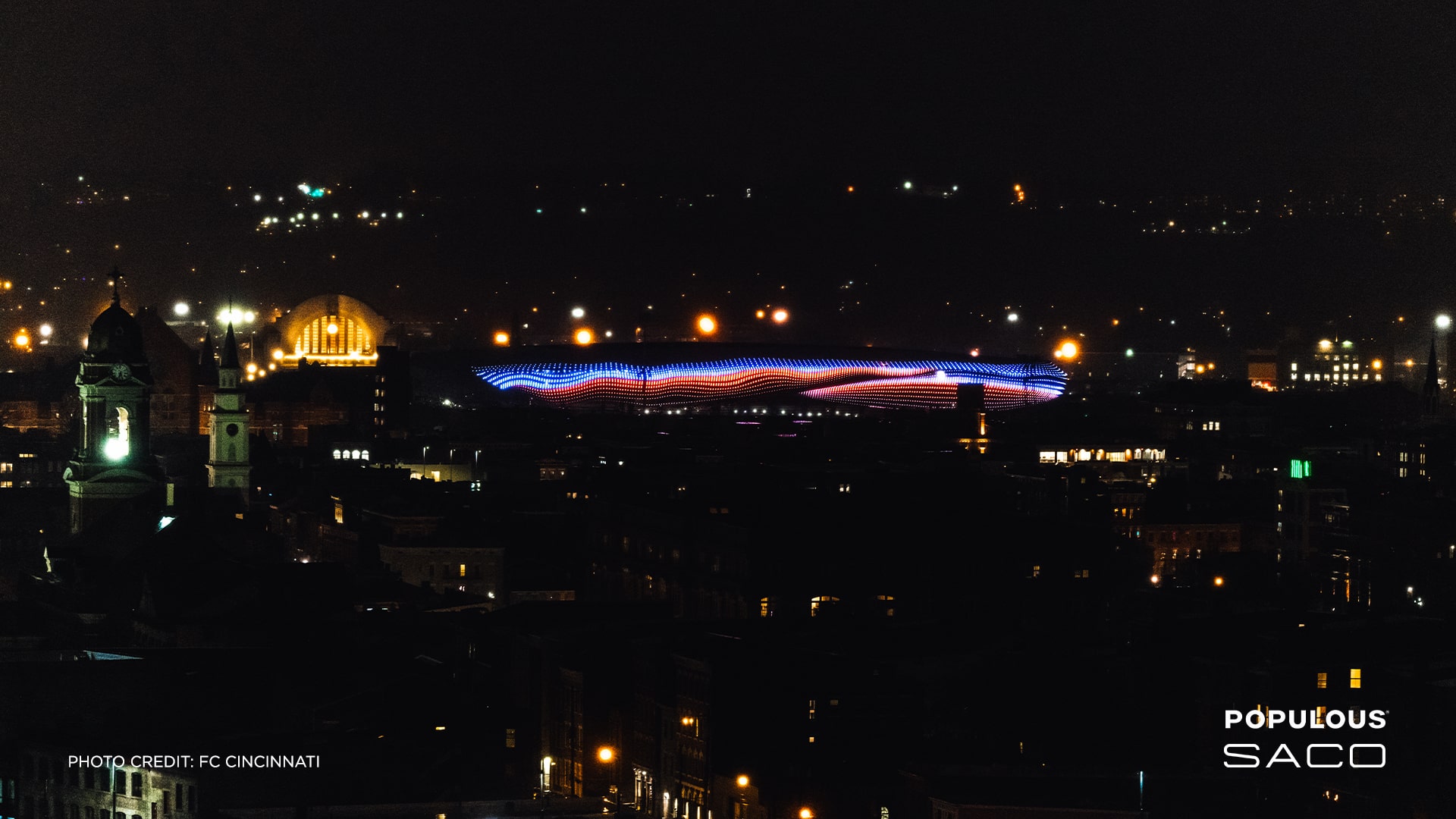 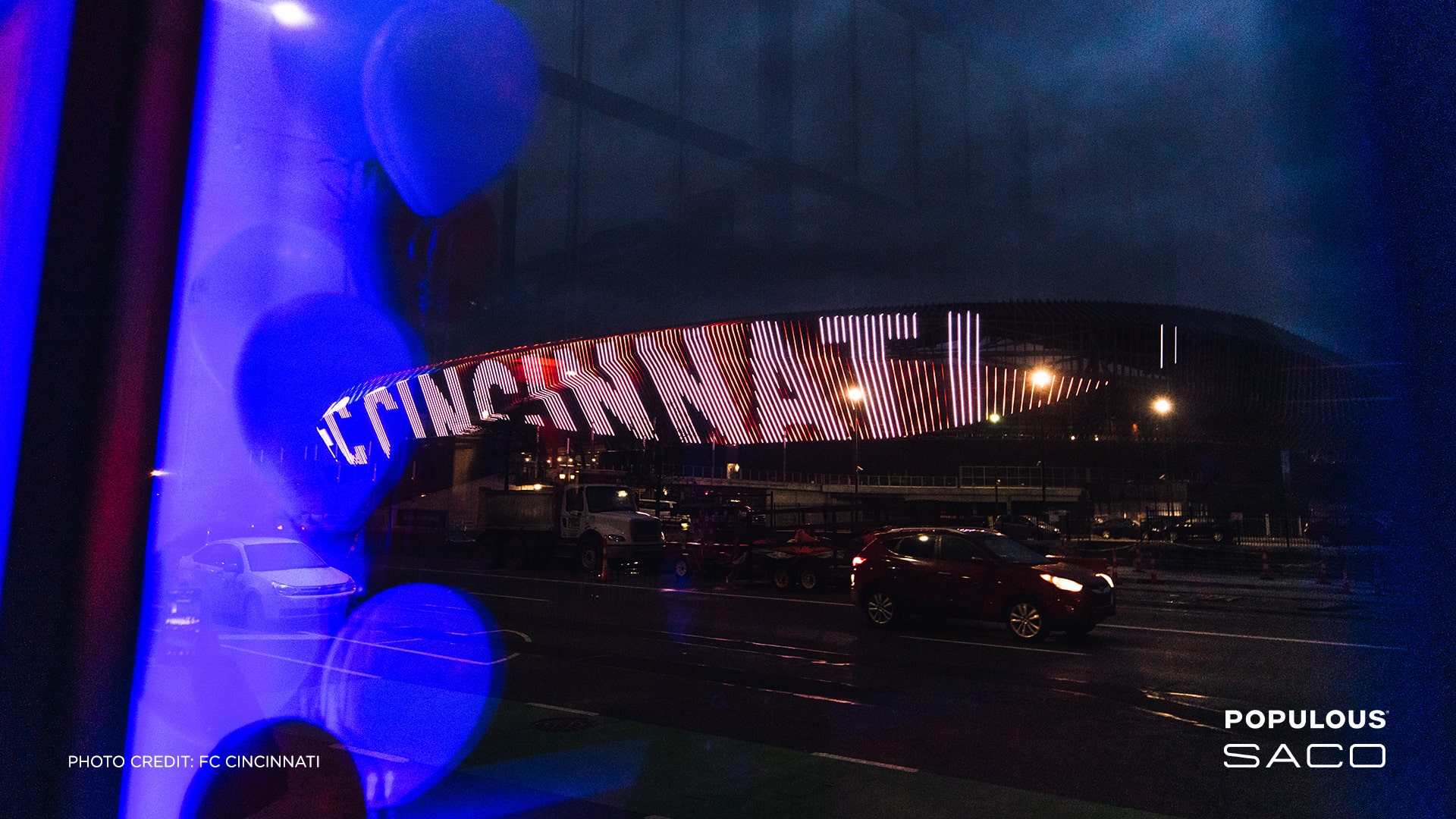 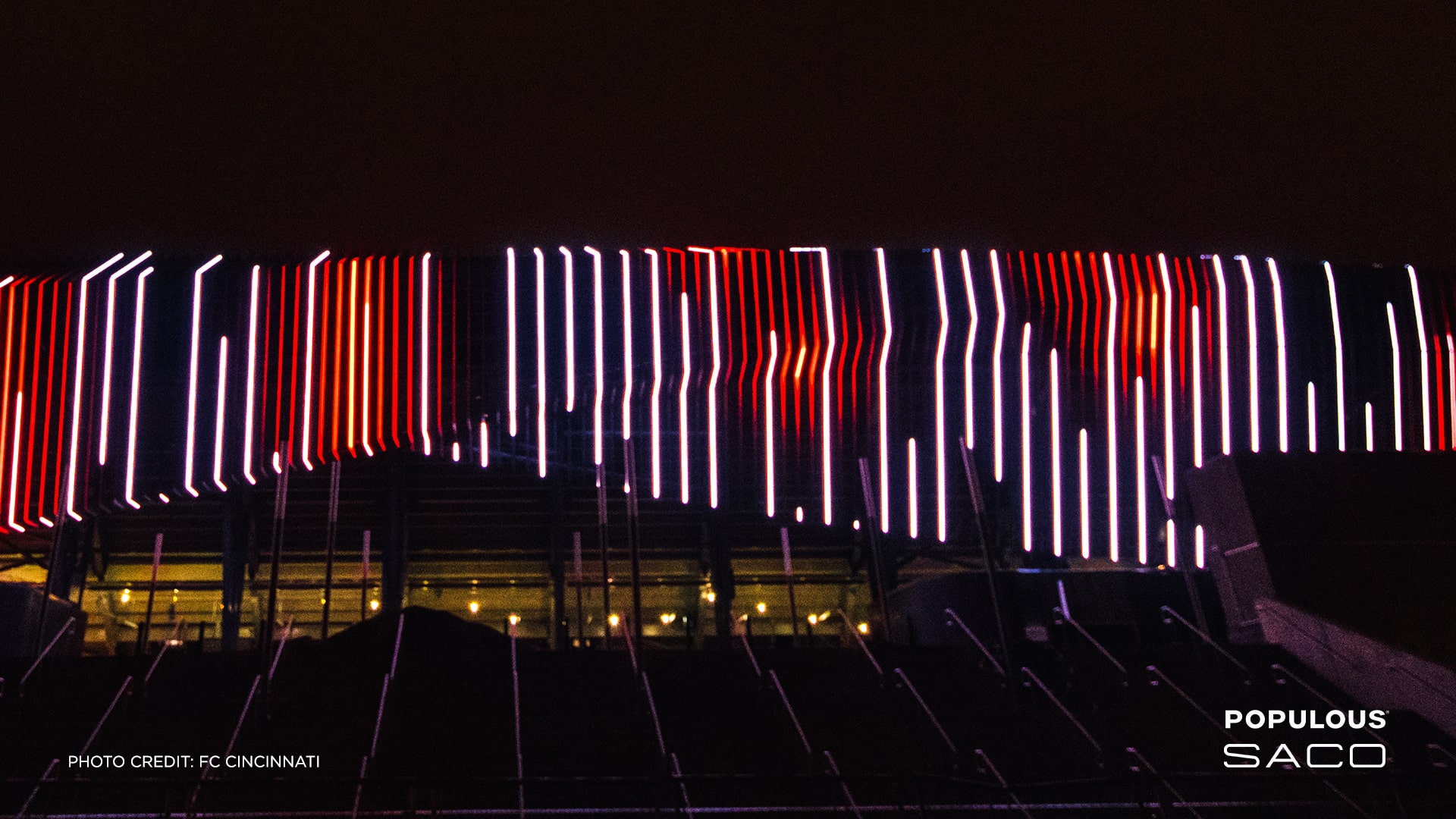 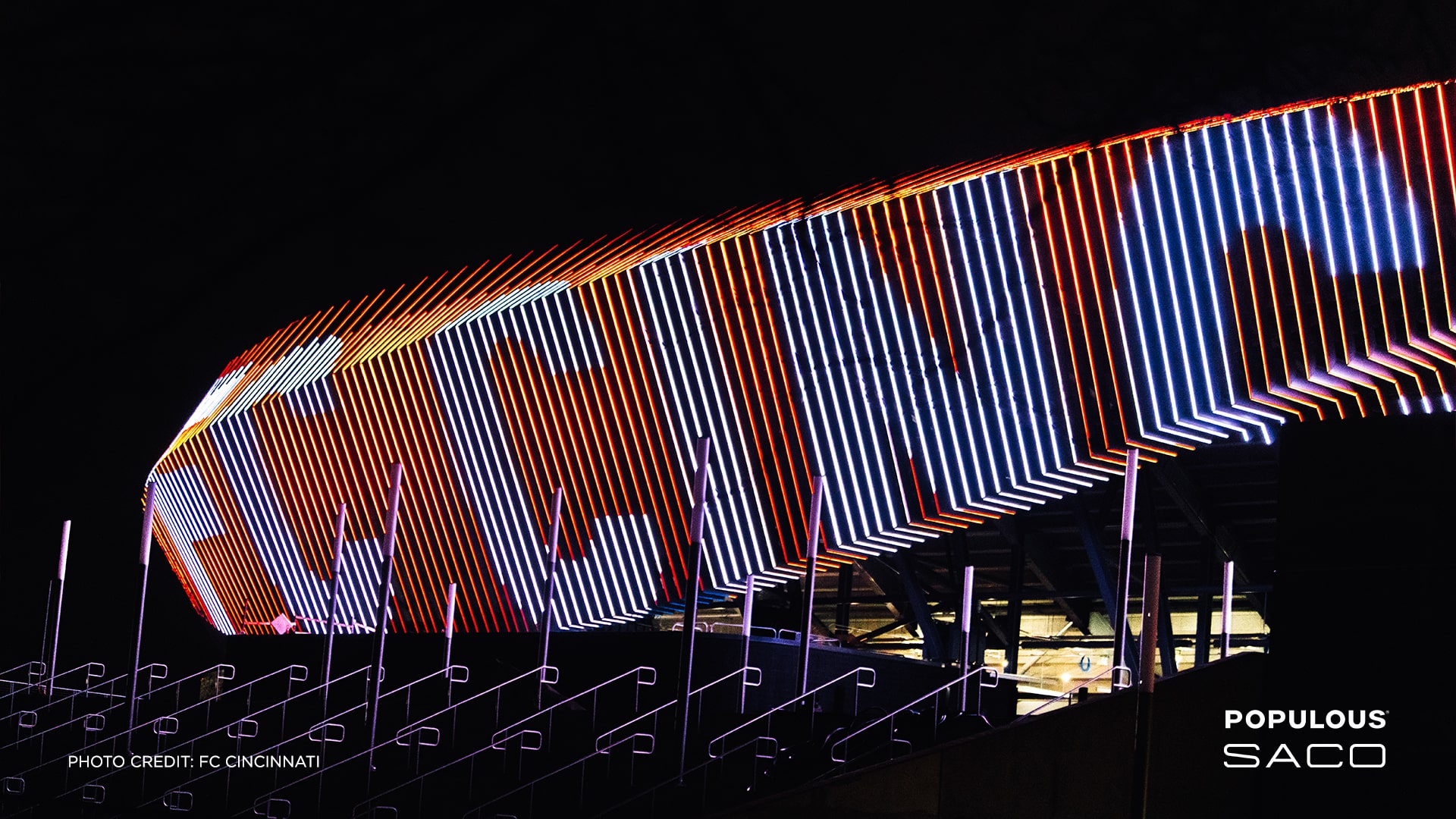 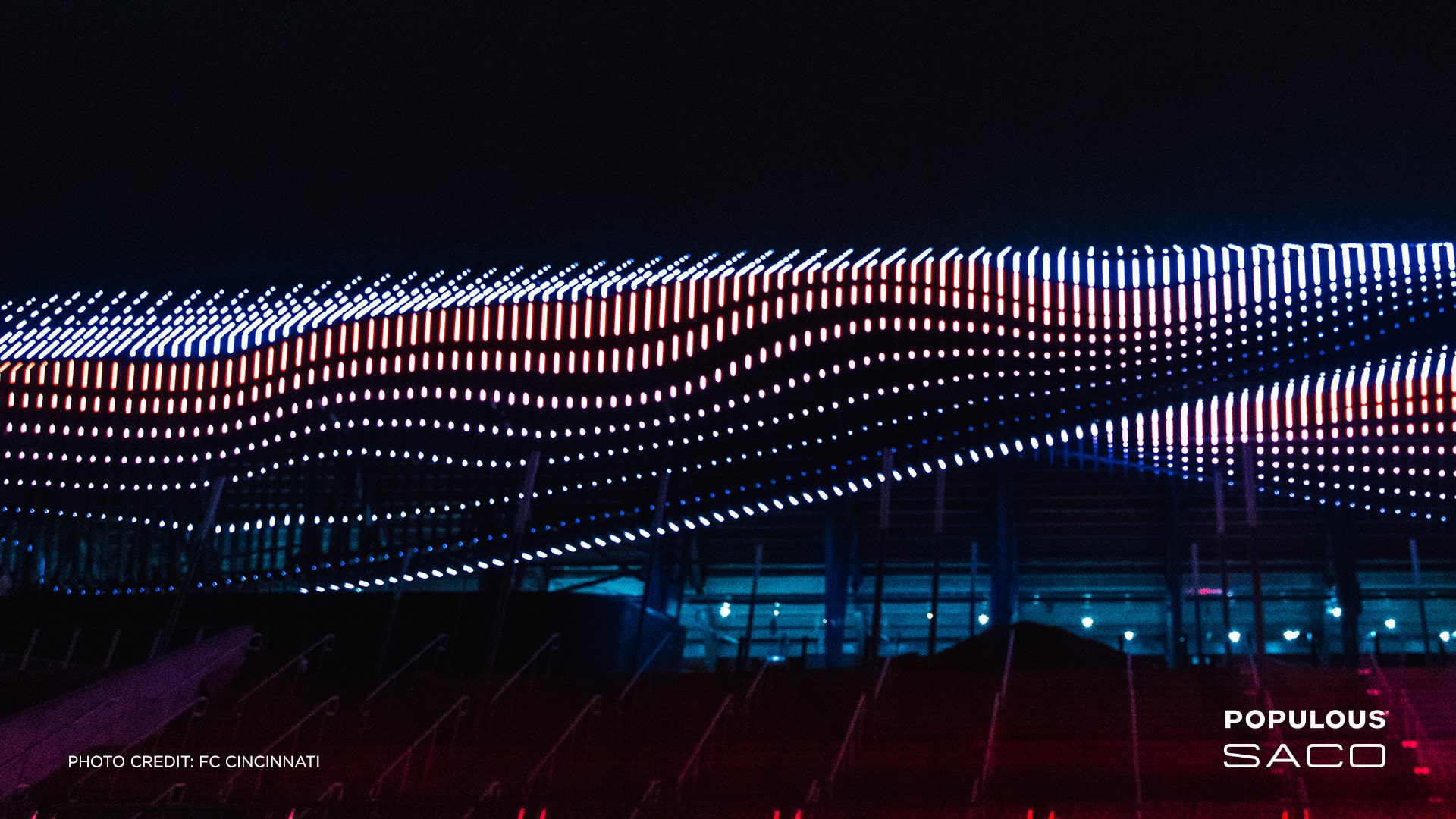 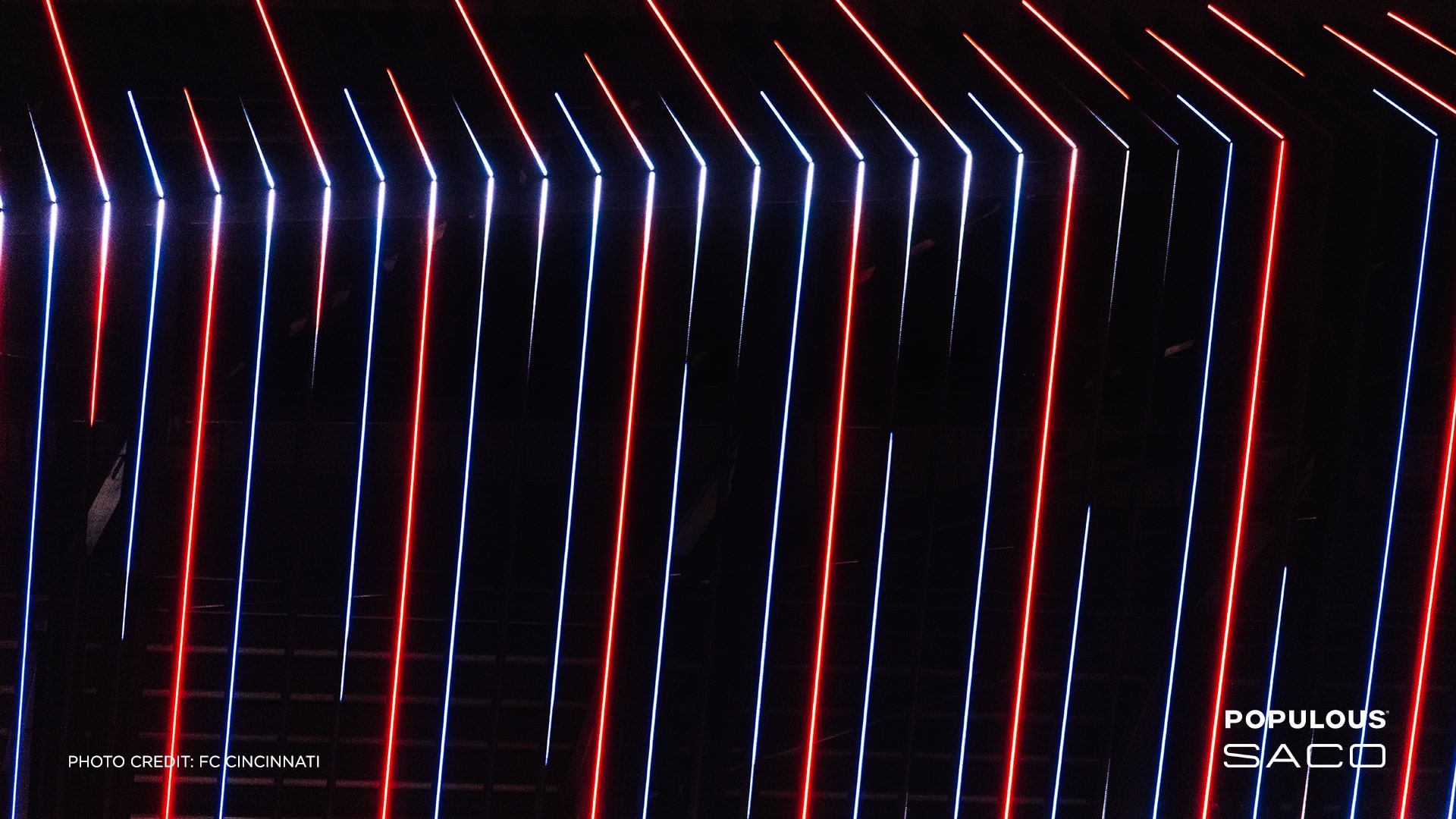 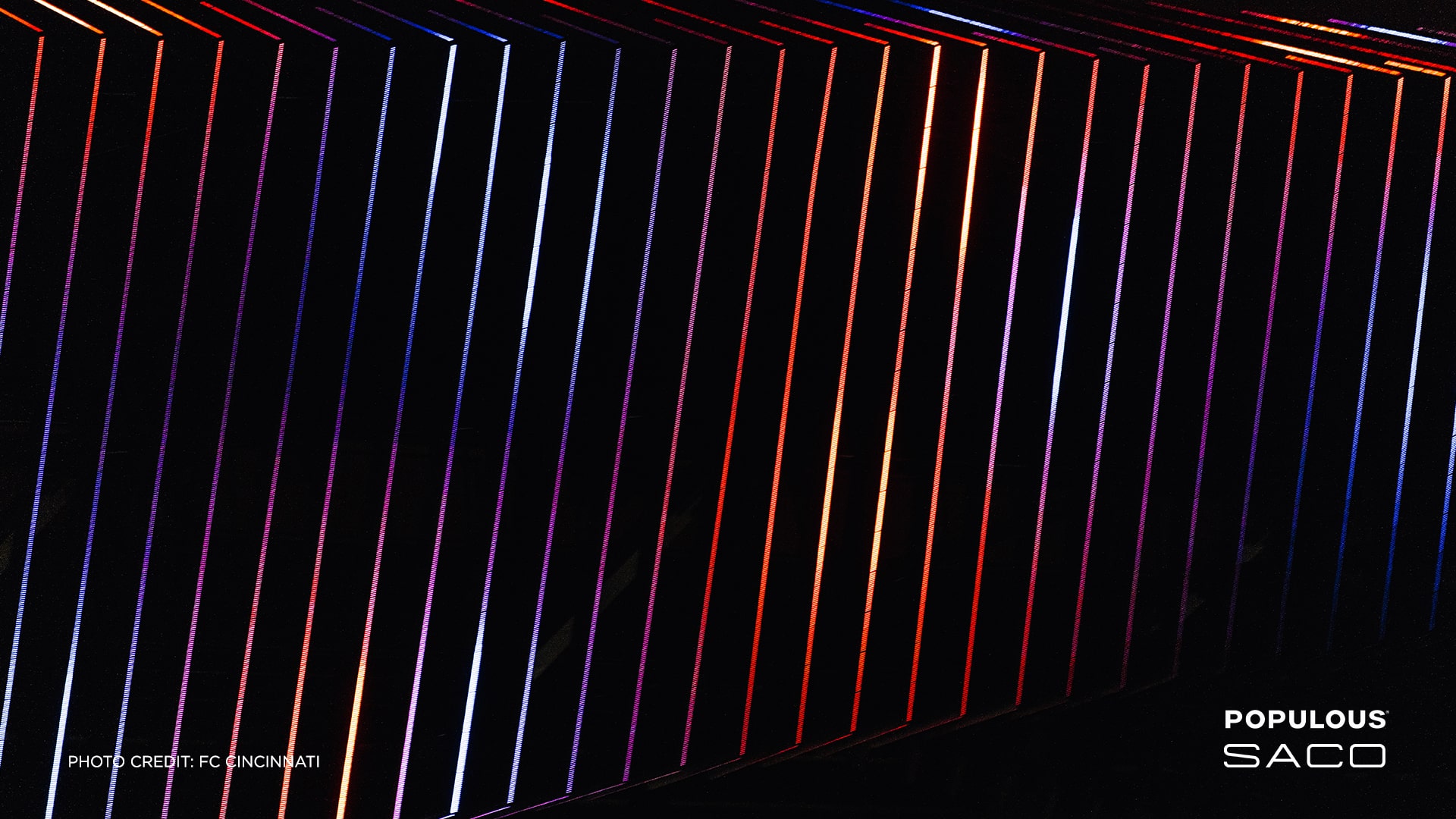 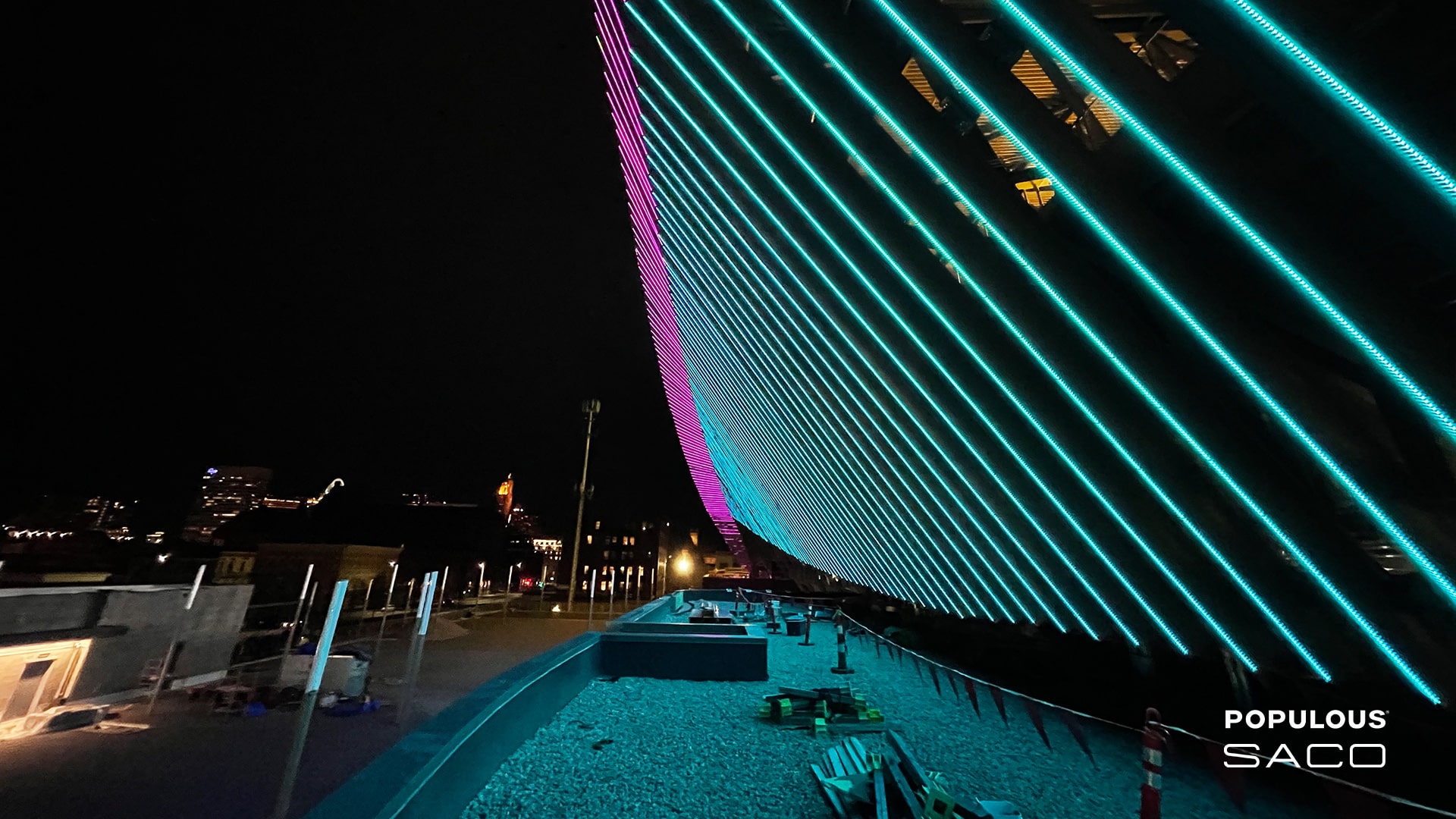 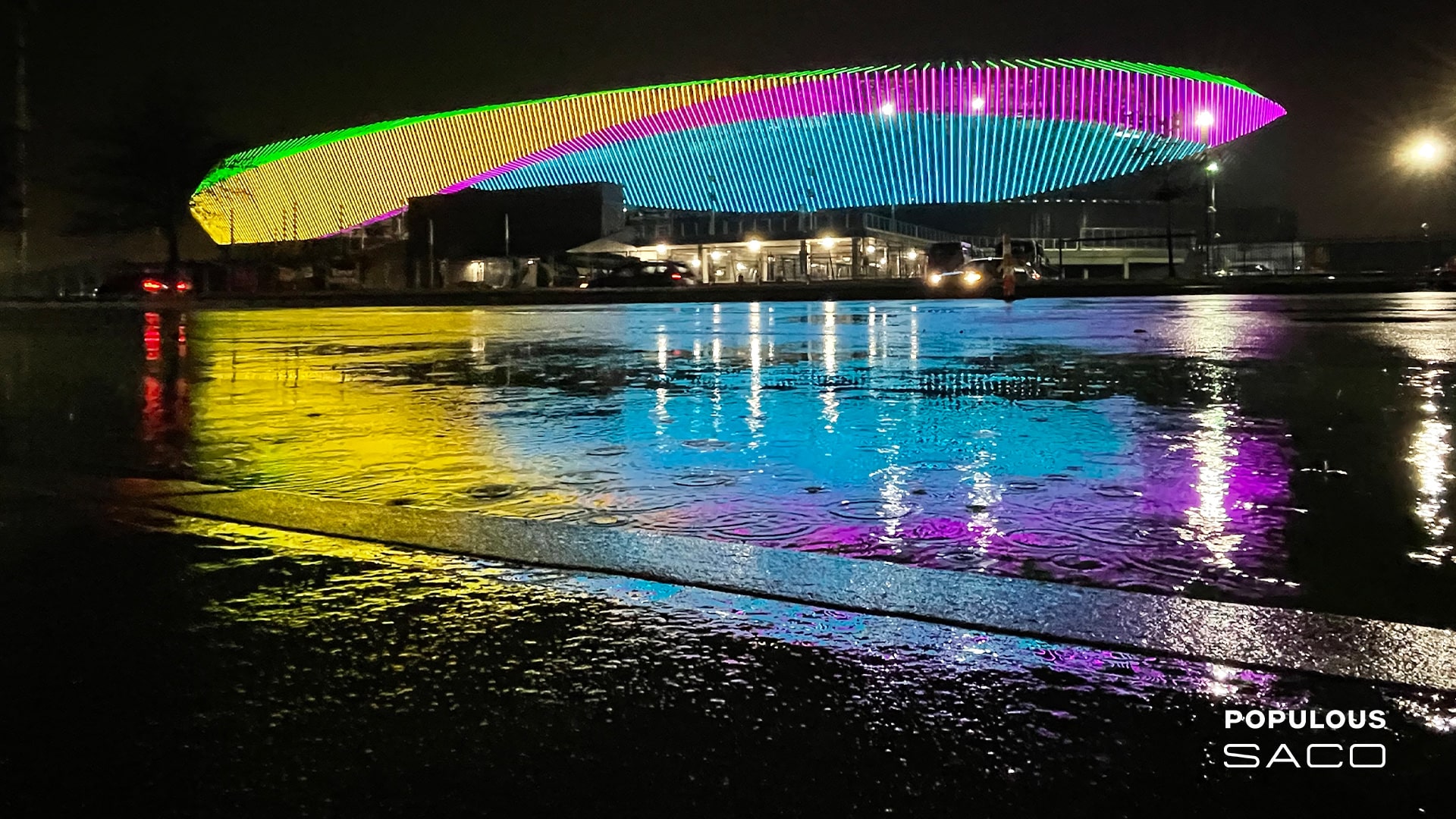 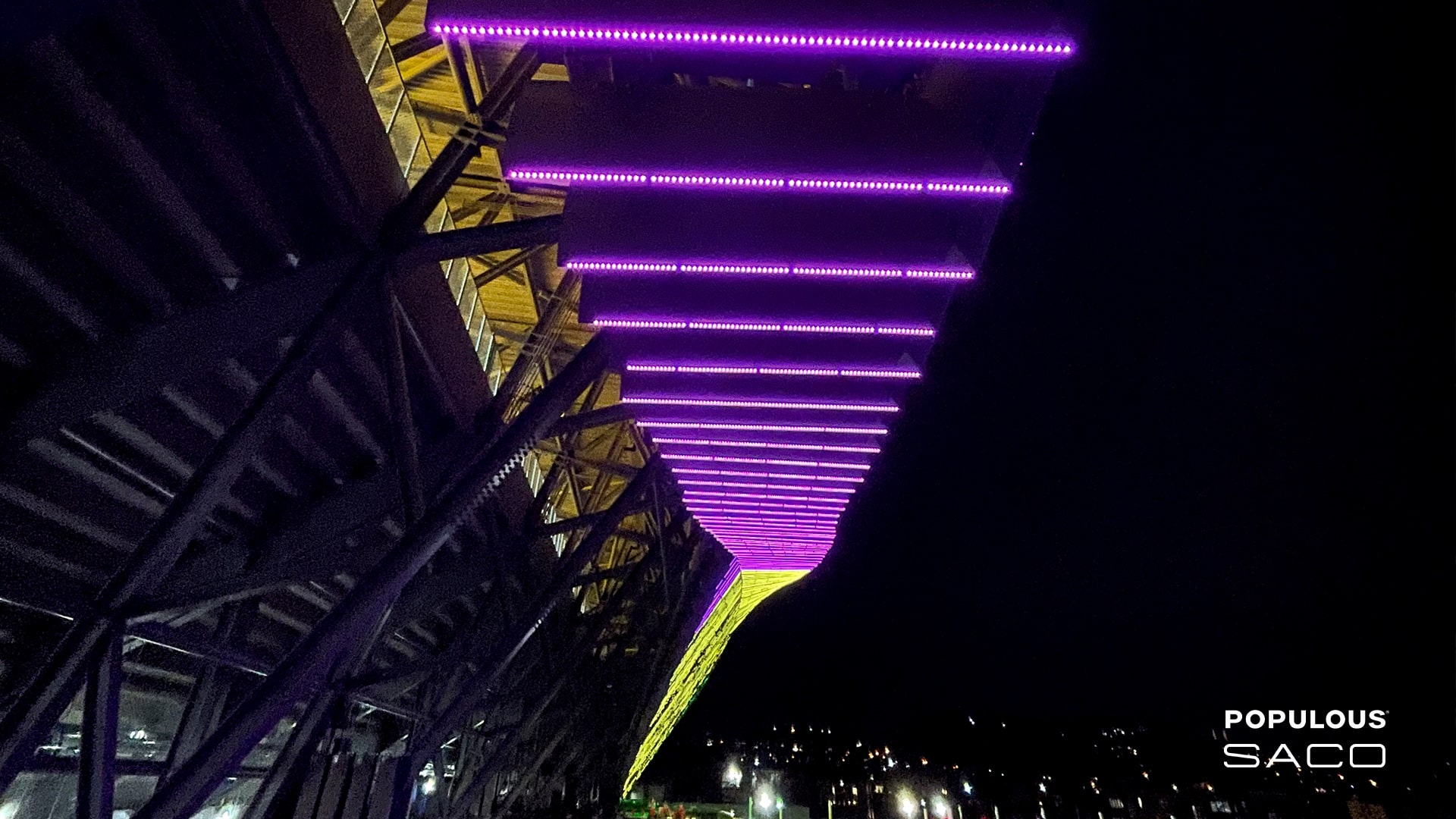 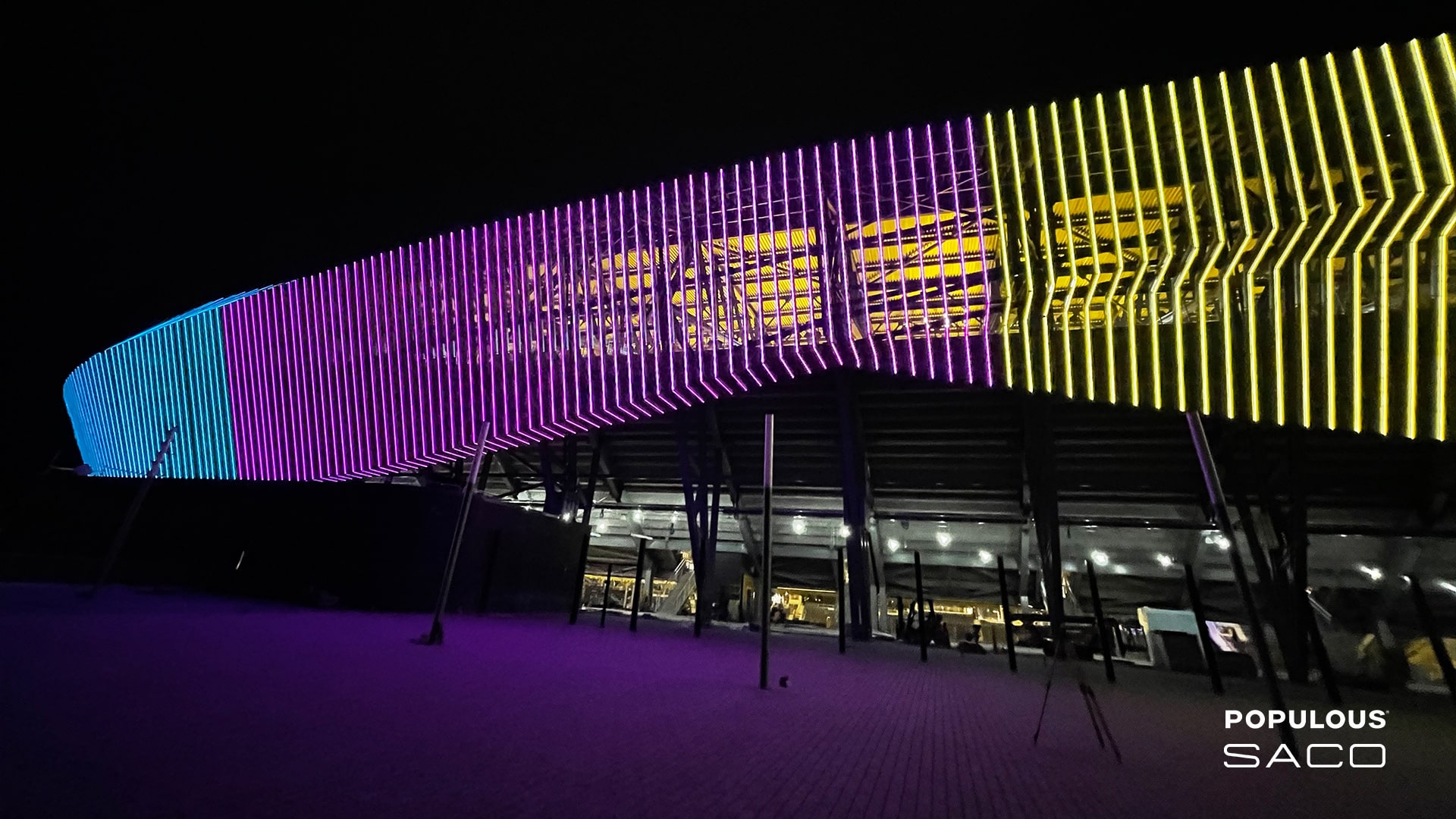 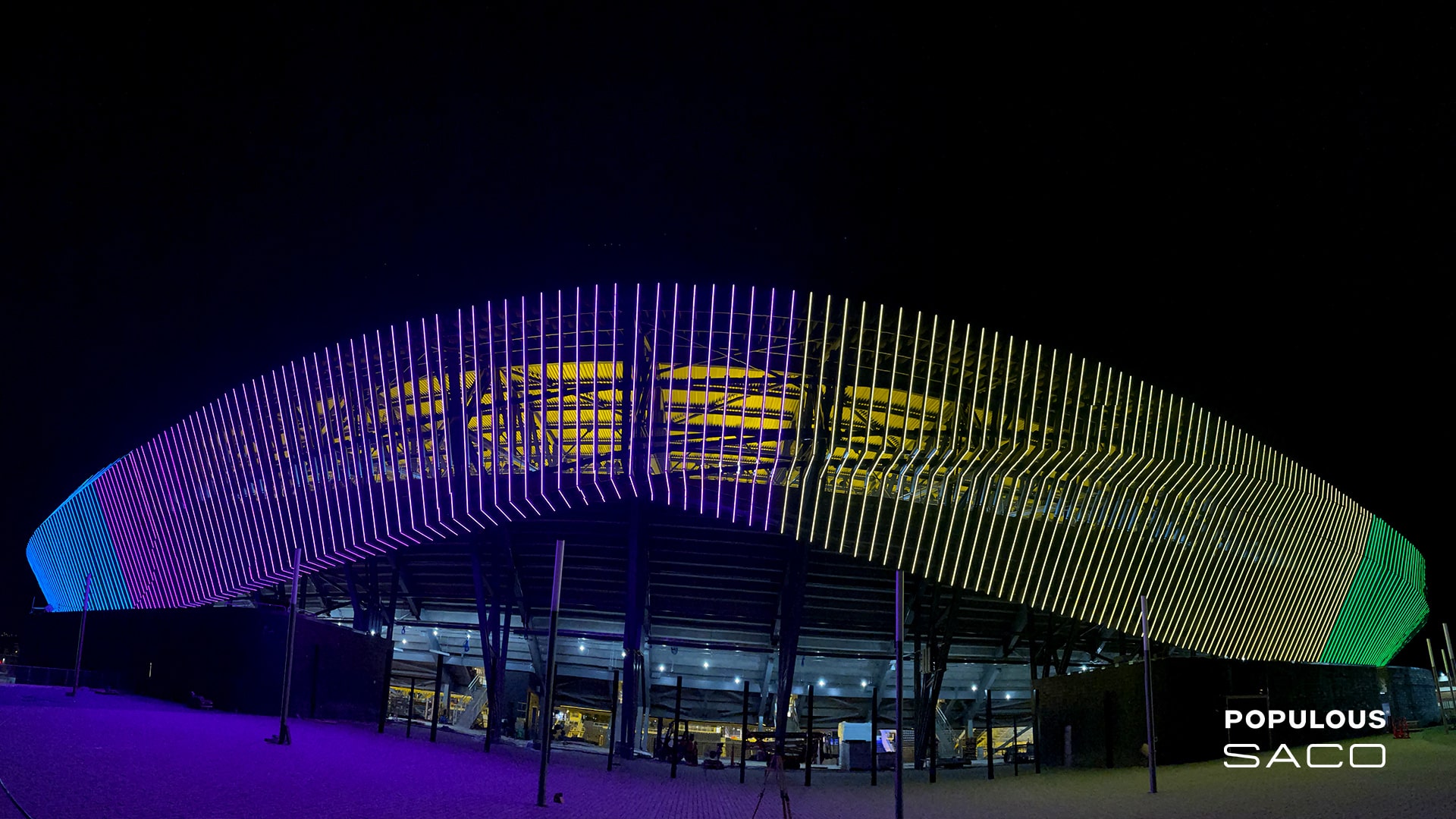 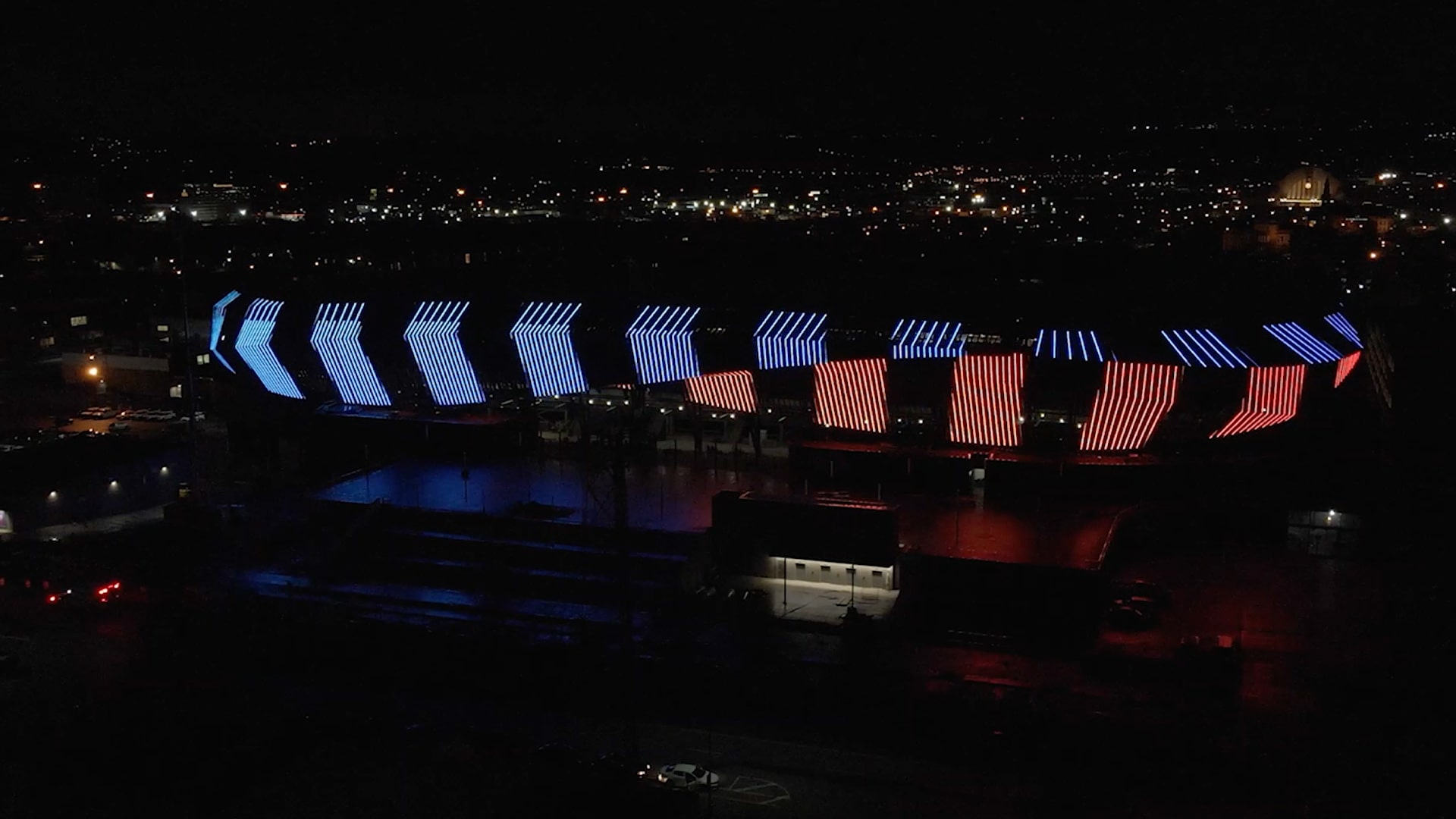